The San Antonio Run the Jailbreak race was held the at the National Shooting Complex in Northwest San Antonio on March 15, 2014. I had heard many good things about this race series from expos and talking to people who came up to the Spartan booth. People had told me that the race was a really good beginner race or a nice change of pace rae for those in training for big races, and it held true to that level! The race day was the series debut for “The Road Less Traveled” section of the course, which was described to be a “crazy” addition of 1-2 miles of obstacles for those brave enough to take the extra bit of course.  The price ranges from 55-75 dollars but there is usally a coupon or groupon available every couple weeks so keep your eyes peeled….. or ask google 🙂

Upon arrival, the festival grounds just made me feel happy with the local expo booths and the numerous amounts of people dressed in green for Saint Patricks day. This was one of those races that I wish i had worn something a little more silly when i saw everyone else, the starting heat was filled with guys in speedos, tutus, girls wearing crazy wigs or colored their hair and wearing custom made shirts with some dirty joke on it!

The course was really fun, and pleasantly paced with obstacles. There were no horrific obstacles within the main course such as a rope traverse, wall climb, rope climb, long barbed wire crawl or heavy lifting. The main obscles course included (but not all listed)

All in all the main course was really really fun to do, I would recommend the race for absolutely everyone of all athletic levels. The terrain was very friendly, except for some rogue grass spurs that occasion pokey rocks while crawling, and the distance was a very nice 5k. The medal was actually pretty cool because the front had the jail break logo, and the back had a bottle opener. And the finisher shirt will make a nice addition to my running shirts, its a lighter Orange color that fits on the larger side but feels like your wearing a cloud because the fabric is so breathable and soft.

But the thing I liked the most about this race was “The Road Less Traveled” section. Right before the finish, participants had the opportunity to go to the mud pit and receive your medal or go through this little arch made of tape and go through this extra little patch of course. Let me first say that the terrain of this part was actually pretty rugged. It was on a part of the property that was not very tame. First, participants had to navigate under some tape up a hill to get where the bulk of the obstacle were in an inactive range in the corner of the complex. The obstacles there were quite a bit more demanding. Participants encountered the following on this bit of the course

The barbed wire cut my lucky OCR shorts when I was almost past the obstacle, and I normally don’t ever touch barbed wire on the obstacle so this was a strange occurance for me. The up-hill obstacles were honestly pretty tough, compared to the main course. The hill that participants had to run up for the obstacle was loosely packed dirt about 20 feet high and roughly 45-50 degree incline up the hill, which was honestly pretty killer if you hadnt been doing your legs days. But all things considered, the extra bit of course made it worth my money to go out there. The addition of some extra sticky barbed wire and the adventure of taking a heavy tire back down the steep was interesting 🙂

To wrap this up, if you love OCR, or just like your free beer for finishing, you should check out this race series. This will be one of many race series that only gets bigger as the sports continues to grow. I would recommend the main course for athletes of all levels (couch potato – Elite racers) and “The Road Less Traveled” for anyone currently training (exercises 2+ times a week – Elite racers). This race series is sure to have more great events this year, so if you are new and need to see what an OCR is like or you need a weekend to unwind and get a cool bottle opener and party with your friends, sign up to escape at RunTheJailbreak.com 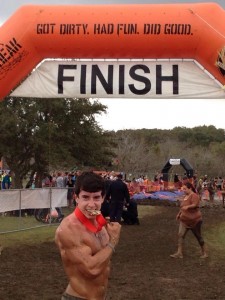 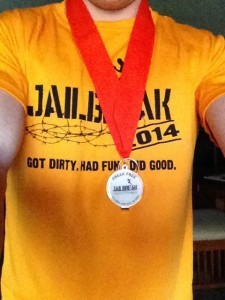